The Book of Judges is one of the most colourful books in the Bible. And one of its most colourful stories is that of Samson—the long-haired man of superhuman strength who wrestled a lion. It’s a story we’re all familiar with, but is it true?

In 2012, archaeologists from the university of Tel Aviv discovered a stone seal, the size of a small coin, in a house in Beth Shemesh, Israel. The seal appears to show a long-haired man slaying a lion. The seal is dated to the 12th century BC—a similar time to the Book of Judges.

Archaeologists Shlomo Bunimovitz and Zvi Lederman downplayed the idea the seal might represent the biblical Samson. They emphasised instead that “a story was being told at the time of a hero who fought a lion,” a story that eventually made its way into the Bible.

While this discovery doesn’t confirm the literal existence of Samson, finding a stone seal of a lion in Israel points to an elephant in the room. Or, more accurately, a lion.

Lions in the Bible

The Contemporary English Version of the Bible contains 118 references to lions. Of those, only 9 are in the New Testament. They all refer to leonine qualities—not to actual lions.

The Old Testament contains several references to lions as wild and dangerous beasts. “As Samson and his parents reached the vineyards near Timnah, a fierce young lion suddenly roared and attacked Samson.” (Judges 14:5)

1 Samuel 17:34 refers to sheep being dragged off by lions or bears—another creature not known in the Middle East today. 1 Kings 13:24 reads: “The prophet from Judah left. Along the way, a lion attacked and killed him, and the donkey and the lion stood there beside his dead body.”

Yet, by the time of Jesus, lions were no longer a danger. Between the Old Testament and the New, lions disappeared from the physical landscape of the Bible.

In a word: desertification. The emergence or spread of desert.

Desertification in the Bible

Desertification is the great unseen backdrop of the Bible in general and the Old Testament in particular. This story—arguably the greatest in human history—didn’t unfold in a desert landscape. It unfolded in a landscape that was slowly turning into desert.

The difference is crucial to understanding the mentality behind the Bible.

The people who inhabit the Bible’s stories were not living in a static environment. They were dealing with climate change in a real and palpable way, just as we are today.

The Middle East wasn’t always a desert. In Saharasia, geographer James DeMeo describes how prior to about 4000 BC it was grassland with river systems that supported vegetation, large mammals (including lions), birds—and people. Gradually, over several thousand years, it turned to desert.

Deuteronomy contains strikingly poetic passages about desertification: “The Lord will make the sky overhead seem like a bronze roof that keeps out the rain, and the ground under your feet will become as hard as iron. Your crops will be scorched by the hot east wind or ruined by mildew. He will send dust and sandstorms instead of rain, and you will be wiped out.” (Deuteronomy 28:21-24)

Why is the shift in perspective from desert to desertification critical?

Because when we understand that the entire Bible took place in the context of desertification, we see the Old Testament’s key scene—the Fall—in a new light.

Adam and Eve weren’t kicked out of the Garden of Eden. Due to climate change, the garden crumbled to dust around them. And that means the Bible, including its disappearing lions, is a whole other story to what we’ve traditionally been told.

Photo by Corentin Marzin on Unsplash 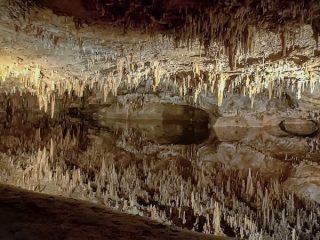